This Report by Christine Roberts 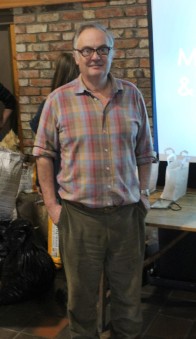 These are the unimproved breeds which are found in regions of the country that have remained geographically remote. They have many similar characteristics but have also developed others to suit their locations.

In general, they are smaller, have coloured fleeces and may be horned. They are hardy, lamb easily, produce flavoursome meat and their fleeces are sought after by hand spinners.

Over thousands of years it is likely that some breeds evolved characteristics by interbreeding before becoming isolated when Britain was cut off from continental Europe. Arriving by the route through Europe via the Mediterranean and Atlantic coasts, the Portland shows some characteristics of Roman Merino. A more northerly route was via the Danube corridor, perhaps more mountainous, and the Vikings are sure to have brought sheep of Nordic origin by sea.

As Britain emerged from the Ice Age repeated thawing and freezing through the seasons produced fertile soils which developed into woodland. These were the home of predators and large mammals so sheep (and humans) were pushed to the margins, the coastal belts and uplands where vegetation was more sparse and not as lush.

Comprehensive breed descriptions can be found at www.harcourtrarebreeds.co.uk. I have picked out some characteristics that I found especially interesting.

Portland, a downland sheep with a thick, soft fleece. The single lambs are born with a fox red coat which becomes cream as it matures.

Soay is the most primitive sheep breed in Britain. Its fleece is roo’d i.e. it is plucked or falls away naturally.

Herdwick, the familiar Lake District sheep, are ‘hefted’. They know their patch of fellside and stay there. Escapees from fields will go on an exploratory saunter before returning ‘home’.

North Ronaldsay have a seaweed diet. As arable farming progressed the sheep were walled out of the central fields onto the island shore. It seems a large part of their diet was already seaweed so they continued to thrive.

Many of the sheep breeds are used for conservation grazing. They will browse on poor grass and tough vegetation so that for example birch trees do not become established. Prime examples are Hebridean and Shetland.

Finally, I wonder whether a book has been written about the Castlemilk Moorit story. It was bred relatively recently on an estate in SW Scotland to have an appealing appearance and good quality coloured fleece. As a regular Countryfile viewer I recognised the name Joe Henson who rescued the few surviving animals on behalf of the RBST.

As a programme of breeding for particular qualities continues there may come a time when we wish to return to the gene pool of unimproved stock to reintroduce lost attributes or to start afresh from pure lines. 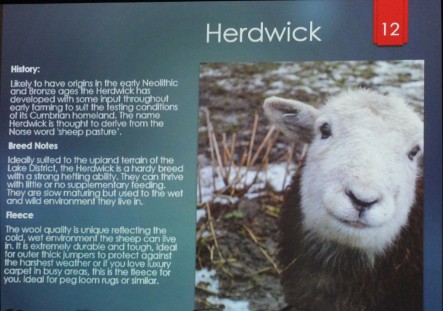 As a preview to her upcoming book Penny gave us an insight into some of the darker elements of the textile hobbies that we all enjoy so much today.

Firstly, Penny talked about many folklore links to textiles, starting with well-known children’s fairy tales in which Rapunzel’s hair is strongly felt to represent the spinning of flax and the spindle on which Sleeping Beauty pricked her finger was thought to be infected by the spinning of raw fleece, causing her to slip into a coma, hence sleeping for 100 years.

It was also thought that spinning wheels could in fact be ‘bewitched’ and many superstitions arose from that, including the sale of ‘charms’ to ward off evil spirits and the removal of the drive band at night to prevent fairies from using your wheel. The link to witches also came about from distaffs as it is believed that witches actually rode distaffs before broomsticks. The distaff was historically a strong female icon and small cartoons drawn by monks show men being beaten by women with distaffs.

Penny then told us of the ghost of Sibell Penn who reportedly haunted a historic building following her death. Strange creaking and whirring noises could be heard at night and were traced to a bricked off area, which, when knocked through unveiled a previously unknown room containing an old spinning wheel.

Disturbingly enough, many women who were murdered in the 19th century had their lives cut short whilst knitting stockings!!!! Although not directly related to their deaths, this fact soon became a common denominator.

In relation to this we were told that following execution, peoples clothes were often stolen and sold and that even partially completed knitted items could be pawned for money.

In 1832 Richard Oastler formed a protest about the use of the elderly and children as cheap or even free labour for textile related practices. Oastler felt that a 10 hour day should be the maximum that any child should be required to work and even resorted to teaching the children how to sabotage the factories in order to enforce the new rule. Strangely enough, Oastler showed no such concern over the number of industrial accidents involving children in the mills.

Finally, Penny talked about the embroideries of Lorina Bulwer who spent much of her life in a workhouse whilst suffering from mental health problems. During her time in the workhouse she produced several large embroideries, using whatever materials she could find, which consisted of long ‘rants’ and contained details of alleged sexual abuse by Dr Richard Pinching. It was reported that Pinching was ordered to seduce a 15 year old girl in 1859, however, no charges were ever brought against him. It wouldn’t be difficult to wonder if the allegations were linked to her ending up with mental health problems. The embroideries are now on display in several museums around the country.

This report from Bev Baldry: –

Bee commenced her talk by asking all guild members to wear one of her hand-made garments which showed a timeline of her weaving progress and the various techniques learned along the way.

Bee’s weaving journey began on a rigid heddle loom, just mastering the basics before she purchased a 2-shaft Saori loom. Here began her first experiments with clasped weft weaving, inlay and travelling inlay, all of which are weft-based techniques. Bee explained that although weaving on a Saori loom is fast, that to warp one up takes upward of five hours and requires assistance, so back to the rigid heddle loom she went.

It was once assumed that in order to weave, that specific yarns should be used rather than making use of either commercial knitting yarns or indeed, hand-spun. Ashford challenged this by producing the ‘knitters’ loom, which was a folding rigid heddle loom for added convenience. Bee’s preference for the rigid heddle loom is based on the fact that it is easy to insert chunky feature yarns and also the soft edges that they produce. They can also be used to create double width and double layer fabrics too.

We were encouraged not to be restricted by the size of our loom as one of Bee’s garments was produced by stitching three sections of weaving together which were each produced on an ‘Ashford Samplit’ loom. Bee explained that the concept of weaving is to produce fabric and if enough air is left in the weaving then the finished fabric will have good drape, which is ideal for making clothes.

The techniques used to produce the woven fabrics for the garments being modelled by Guild members were explained. They included the use of both cheap, synthetic yarns as well as more expensive animal-based yarns together to produce interesting textures, both warp and weft based experimental techniques, the use of alternating colours to produce patterns and the use of different weight yarns in the warp and weft. Bee’s colour palettes were chosen by placing a selection of coloured yarns together in a bowl that is placed somewhere that she would see it often and subsequently add and remove colours over a matter of days until she was happy with the combination. The construction of the garments is in some ways very simple, as in most cases, no cutting is required. By simply stitching up certain edges of the pieces at certain angles and adding twists, an array of styles can be created.

Bee also treated us to a tale of her purchase of a 7ft Tri Loom from a stately home which included grossly misinterpreting the word ‘estate’ whilst attempting to find the address of the seller, getting extremely lost (as in 4 hours late lost!!!), not realising that 7ft would not fit in to her car and being banned from warping the loom up in the Travel Lodge that night!!!!!

Bee demonstrated to us that stunning results can be achieved on even the smallest and most basic of rigid heddle looms with a bit of imagination and the effective use of colour, technique and textures.

A fascinating presentation in three parts:

First a bit of the historical background supporting the claims to the English throne after the death of Edward the Confessor. This explains the tensions in 1066 and the three ensuing battles, Fulford, Stamford Bridge and Hastings.

This tapestry (embroidered, not woven, modelled on the Bayeux Tapestry) depicts the stages of the Stamford Bridge Battle in which the Saxon crowned Harold Godwinson defeats the Viking Harald Hardrada, supported by Harold’s disgruntled brother Tostig. It was a massacre, the fields seen 50 years later described by a monk as white with bone.

I was fascinated to hear of the ‘ Berserkers’ an elite group of Viking fighters, tall, wearing bear skins, hyped up on magic mushrooms, fighting in a frenzied trance. One such is depicted being speared from underneath Stamford Bridge which he was defending.

Secondly we have the story of making the tapestry. It was the brainchild of Tom Wyles co founder of The Battle of Stamford Bridge Heritage Society, Viking enthusiast and re enactor, designed by Chris Rock a graphic designer and stitched by 25 embroiderers under the direction of Shirley Smith., professional textile artist. There are 12 panels making a length of 15m, 60cm deep. The tapestry is sewn on linen (costing £100 per metre!) and backed with calico on which the design is drawn. Eight colours of wool are used similar to those used in the Bayeux Tapestry with the style and stitch the same. We were able to handle samples showing the way the details are outlined in one colour and then filled in with another, using 3 layers of stitching, making the Bayeux stitch.

So far the project has cost £6000 and more money is needed to purchase the cases in which it will be displayed. Cards, jigsaws, T shirts, embroidery kits are all on sale to raise funds. Hopefully by the 950th anniversary in September the tapestry will be in it’s permanent home in the Old Station Club Heritage Centre at Stamford Bridge. 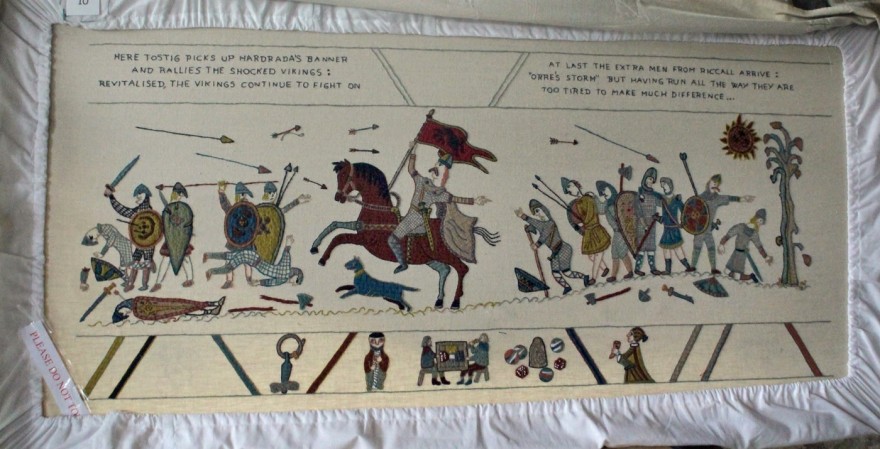 Thirdly a display of many of the panels was set up in the Gin Race room for us to examine.

It was so interesting to see the work up close and have some of the quirky features pointed out – a soldier calls for help on his mobile phone, and another is wearing glasses. A dog is depicted in every panel, looking dejected with an arrow in his paw on the penultimate panel and with it bandaged in the last.

Each panel has a strip at the top with script explaining the action and at the bottom another strip showing scenes of everyday life. Panel 11 is of particular interest showing a loom, spinning wheel and woman holding a distaff. (Just a thought, were spinning wheels in use at that time in England? I can’t find a definitive answer to that). Each embroiderer has their own symbol along with their name in runes, embroidered in the lower strip of each panel they’ve worked on. What a project to have been involved with and how proud all involved must be! It’s such a wonderful piece.

The website, http://www.stamfordbridgetapestry.org.uk/ has more information and pictures of each panel.